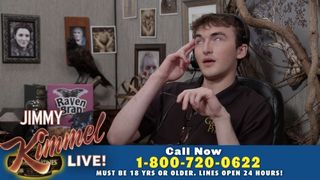 If you have burning questions after watching Sunday night’s episode of Game of Thrones, you’re in luck as Jimmy Kimmel has relaunched his “Game of Phones” hotline.

Kimmel enlisted the cast of the series, including Liam Cunningham, Lena Headey, Isaac Hempstead Wright, John Bradley, Sophie Turner and Maisie Williams to answer fans’ questions like “What does Kit Harington smell like?”

In the clip above, one caller even manages to get themselves added to Arya’s kill list after questioning Maisie Williams on the ending of this weeks episode, while another asks Hempstead Wright where she left her keys.

Watch the hilarious video above and in case you missed it, watch the first “Game of Phones” installment below.

‘Game of Thrones’ Documentary to Air on HBO After Series Finale
MoviessponsoredMarch 28, 2019

Watch the Tense Trailer for the Last Ever Episode of ‘Game of Thrones’
MoviessponsoredMay 13, 2019
What To Read Next
Load More
Search Results
Load More