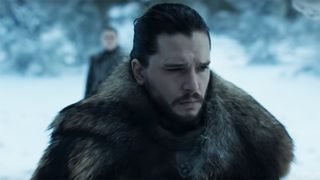 HBO unveiled two new Game of Thrones promo trailers over the weekend, delivering a fresh look at season eight before it arrives in two weeks.

The new clips don’t offer a ton of new information but are stacked with shots of the Unsullied marching, dragons swooping, and various characters looking up in wonder.

Among the new scenes are Arya and Jon Snow together for the first time since season one, Beric Dondarrion wielding a flaming sword next to the deeply fire-averse Sandor “The Hound” Clegane, and Daenerys Targaryen staring into a fireplace with Jon standing behind her.

Could this be the moment they discover they’re actually related? After all, as Kit Harington told TV Insider last week, Jon is “not the kind of person who can [knowingly] jump in bed with a relative.”

Check out the new trailers above and below.

Game of Thrones season eight premiers on HBO on April 14.

This Is the Reason Jon Snow Ghosted Ghost In Sunday’s ‘Game of Thrones’
MoviessponsoredMay 9, 2019