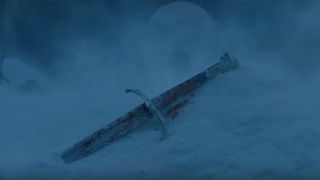 With the premiere of the final season of Game of Thrones less than two weeks away, HBO continues to ramp up promotion of season eight. Following yesterday’s pair of promo trailers, today the network shares yet another teaser.

Fight for the living. #GameofThrones pic.twitter.com/GpG7m53Nqg

Titled “Aftermath,” the roughly one-minute clip gives us a look at the desolution following the battle for the Iron Throne. While no characters appear in this particular teaser, we do see an empty Winterwell covered in snow and ice, while a tattered House Stark banner, Jon Snow’s Valyrian steel sword Longclaw, Daenerys’ chain, Tyrion’s Hand of the Queen pin, Arya’s sword Needle, Jaime’s Golden Hand, Sansa’s feather, and Bran’s wheelchair are shown as well.

Game of Thrones season eight premieres on HBO on April 14. Ahead of the new season, you can catch up on all 67 previously-released episodes by watching the 12-minute video below.