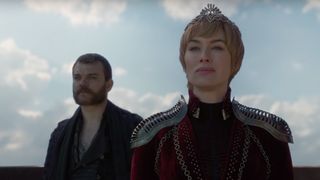 “Winter is coming” has been the driving proposition for Game of Thrones from the very beginning. But now, with the Night King and the White Walkers defeated and the “Battle of Winterfell” won, it’s clear that another momentous conflict is still ahead.

In the teaser trailer for next week’s episode 4 of season 8 Daenerys tells the surviving troops in Winterfell; “We have won the Great War, Now we will win the last war.” As many fans suspected, the remaining episodes of the final season shift from the existential threat of The White Walkers to a more domestic conflict, as new allies and old enemies fight it out for the Iron Throne.

We see Cersei looking out over her Golden Army of mercenaries in King’s Landing. Meanwhile, Daenerys has psyched up the remaining armies to head south with Dragons and ships; “We’ll rip her out, root and stem,” she warns.

‘Game of Thrones’ Prequel Has Been Cancelled by HBO
MoviessponsoredOctober 29, 2019
What To Read Next
Load More
Search Results
Load More