“I like Swae Lee‘s style: he has a fearless and authentic touch,” said Giuseppe Zanotti, who tapped the Grammy-nominated rapper for the brand’s latest collaboration. The highlight of the limited-edition capsule is the Blabber sneaker available in pink, black, and white with a hand-painted floral motif. The capsule also includes glittery silver block-heel boots, pink suede loafers, and canvas boots with hand-painted florals that sit somewhere between a gala dinner and a tattoo parlor.

The shoes have the breeziness that is at the core of Swae Lee’s signature sound. In “Sunflower,” Post Malone’s #1 hit with Swae Lee, you can hear his voice rap-singing in falsetto, combining the harsh sounds of SoundCloud rap with infectious, poppy vocals. Zanotti’s designs for Swae Lee capture that spirit of grit, suave, and a touch of romance. The designer went on to describe Swae Lee’s style as “able to straddle different worlds – tough and soft; luxury and street – effortlessly and naturally.”

Swae Lee is one half of the hip-hop duo Rae Sremmurd with his brother Slim Jxmmi. The two appeared in last year’s Giuseppe Zanotti campaign for the Blabber sneaker, where Swae Lee first met the designer. Though the designer was in Swae Lee’s mind long since before they’d met. In 2014, Swae Lee name-checked Giuseppe in the Rae Sremmurd track “We” — a siren call for a partnership that the designer eventually answered with their collaboration, “Giuseppe for Swae Lee.”

“These shoes really reflect my creative POV, my eclectic approach to style and the idea that fashion doesn’t have to follow any rules,” said Swae Lee, who was involved in every step of the creative process. Swae Lee has gone on record to declare pink as his favorite color, which features throughout the capsule that also debuts a new “GZ” monogram for the brand, in gold.

Ahead of the drop for “Giuseppe for Swae Lee,” we caught up with the rapper to talk about the collaboration.

How did you translate the Swae Lee sound into the design of the shoe?
Because it’s something smooth that can be worn, it doesn’t have one class, it’s limitless. Anybody from any different world can wear it, it’s not made for just one type of person, similar to my music.

Florals appear as a motif in the design, what do they mean to you?
Flowers mean growth, development and blossoming.

The collaboration debuts a new monogram for Giuseppe Zanotti. What was the occasion for the new design?
I wanted the monogram to appear on the shoes to show they are still in tune with the people, they know what’s going on in the culture with the people. They know that I’m one of the guys pushing music forward right now, and they reached out to me and we made it happen. Two worlds collide.

What would you style these shoes with if you were going out to a party?
I would wear the low-top whites with some light blue jeans and a casual button-down tee and some cool specs to go along with my outfit and a nice belt and it would turn a lot of heads. Girls would be running down the street chasing me and it would be a lot of madness when I wear this fit and step out into public. I would make all the headlines!

Are there other design projects you see yourself doing in the future?
I definitely have to make clothes to go with the actual shoes. Not just shoes, [but] like make the whole outfit, the whole season. 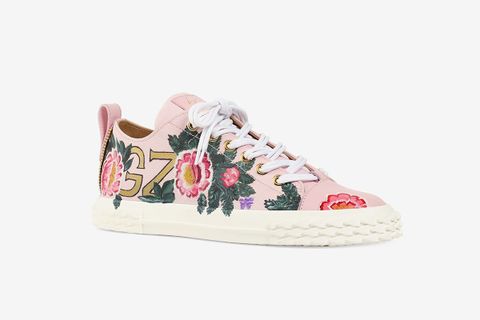 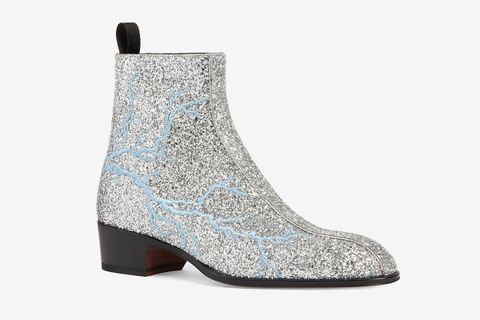 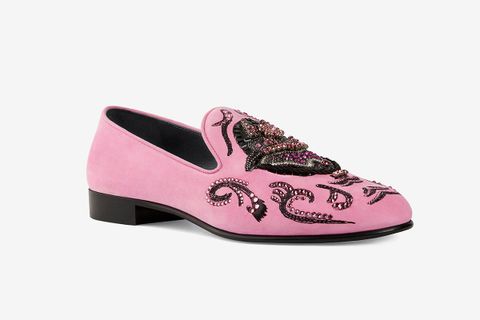 Shop the “Giuseppe for Swae Lee” collection on Giuseppezanotti.com.

Sponsored Story
The Giuseppe Zanotti Talon Takes to the Streets of Berlin in New Lookbook
SneakerssponsoredFebruary 10, 2020