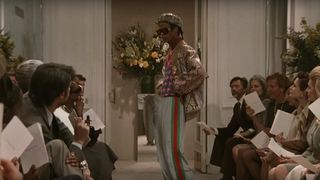 Gucci‘s new FW19 campaign serves as an ode to Prêt-à-Porter fashion, dissecting the evolution of ready-to-wear style from the ’50s through to today, and showcasing garments from Gucci’s theatrical FW19 collection. Watch the campaign video above.

Alessandro Michele presents a nostalgic account of a garment throughout the campaign, taking inspiration from clichés regarding the fashion industry as a whole as well as highlighting the various stages that are involved in a garment’s creation.

The film up top was shot by Glen Luchford and moves at a refreshingly restrained pace. Michele was “inspired by reportage imagery of a scene established as an industry cliché: designers and their models acting out the seasonal ritual of fittings, catwalk display and magazine shoots, with the attendant backstage frenzy and front row parade.”

Elevate Your Headwear Game With These 10 Statement Hats
SelectssponsoredJuly 31, 2019