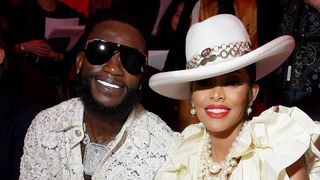 Gucci Mane‘s relationship with Gucci has done a “360.” The rapper spoke about their changing dynamics on Ebro in the Morning following the release of Woptober II.

“I wouldn’t say that they need me but I would say that it’s definitely a 360 from the relationship we used to have where they used to cease and desist over 100 times to where they’re embracing me and we’re partnering up,” he said.

He explained that the relationship had actually been “a long time in the making.” Speaking on the genesis of his name he told Ebro,”My grandfather did go to Italy during World War II” and it was here that he first saw Gucci designs. He was so struck by the garments that “when he came back he called my dad “Gucci Boy.” Eventually, Gucci was assigned the moniker, too and adopted it for his music career.

In terms of the partnership, Gucci explained that the label had been watching him. He recalled, “the opportunity came, I think I had an influence, I look good, I’m handsome, I put the clothes on and I make them look good.”

In the video above, Gucci also opens up about the necessity of holding brands accountable and Gucci’s blackface controversy. He also offered his thoughts on snitching, and explained how he rehabilitated his life after a stint in prison.

On this week’s episode of The Dropcast, we are joined by DMV’s IDK who recently dropped his debut album Is He Real? featuring a slew of big hip-hop names.