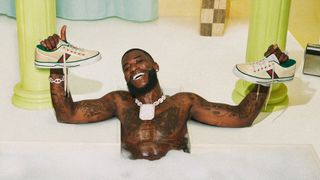 Gucci has released an interview with Gucci Mane and Harmony Korine as part of its Cruise 2020 campaign. In it, the director and the photographer of the campaign interviews Gucci mane about the origins of his name, which was passed down from his father. When asked what it would mean if his father saw him now, he said, “He’d be proud. It’s a big moment. I feel like I got adopted into the Gucci family. I feel like I just got married.”

He’s taking those nuptials so seriously he says he’s even thinking about moving to Rome. “Can you imagine the music he’ll make in Italy?” Korine says. “Italian trap.”

Watch the exclusive clip above, which also contains footage of Gucci Mane at the table with Korine and Alessandro Michele.