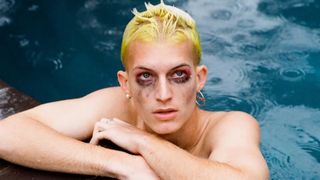 Last year, Gus Dapperton made a big splash with his theatrical You Think You’re A Comic! EP which featured the hit single “Prune, You Talk Funny.” Today, the New York artist has blessed our eyes and ears by rolling out a video for his latest single, “My Favorite Fish.” It’s exactly what we need to bring back the art of slow dancing as he merges the best elements of pop and R&B. Shot at his parents’ house in Long Branch, New Jersey, the singer-songwriter cruises on love boat with some of his closest confidants.

If you didn’t pick up on the line “Softspoken/ Chipper and choking/ Jess will lead the way cus she can mimic the motions,” the sweet tune is clearly inspired by his girlfriend, photographer Jess Farran who coincidentally shot the artwork for the single and is prominently featured in the serene visual. “My Favorite Fish” follows the previously released single “World Class Cinema.” Both songs will be featured on Dapperton’s newly announced debut album Where Polly People Go To Read which is due out on April 19 via AWAL.

Take a breather and dive into the refreshing visual above and scroll down for the list of Dapperton’s international tour dates. You can also find out why you should be obsessed with his quirky work in our “10 Artists to Watch in 2019” feature.

Gus Dapperton Lives Up to His Early Promise on ‘Where Polly People Go to Read’
MusicsponsoredApril 26, 2019

A Modder Made the Gamecube Joy-Cons We Wish Existed
DesignsponsoredJanuary 14, 2020
Follow
Highsnobiety Music
What To Read Next
Load More
Search Results
Load More