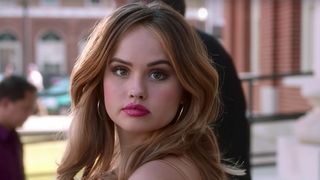 A petition demanding Netflix halts the release of new series Insatiable has received over 90,000 signatures after the streaming giant published an official trailer for the show which some claim promotes body shaming.

The series is intended as a dark comedy with a narrative centered around a high schooler named Patty who, over one summer, has her jaw wired shut and therefore loses a lot of weight. Having transformed from overweight to “conventionally attractive,” Patty is no longer bullied and instead has her pick of peers to socialize with. But she’s not interested. Rather, she goes on a revenge mission to get back at those who once picked on her. Watch the trailer up top.

The petition labels Insatiable as toxic and states that it plays on societal issues where women value their worth based on the size of their bodies. “This series needs to be canceled,” it reads. “The damage control of releasing this series will be far worse, insidious and sinister for teenage girls, than it will be damaging for Netflix in their loss of profit.”

The backlash has been so big that the show’s writer Lauren Gussis and star Debby Ryan have both taken to social media to respond, asking viewers to look past the trailer in lengthy posts.

This is my truth. @insatiable_ pic.twitter.com/xbs3YtueCQ

Their stance, however, has not placated the internet, as you can see by the passionate responses below.

Thin does not mean better

Thin privilege wouldn't exist without fat agony.
Thin people depend on the pain of fat people to give their thinness value.
And Insatiable is a perfect example of that.

Just saw the trailer for Insatiable. I hear the actors and team behind it are asking us to look beyond the trailer but trailers are supposed to entice us – this trailer repelled me. How in any world is weight loss from a jaw being forced shut inspiring? Do they know what implies?

weird how netflix isn't making a show about my high school experience where the most popular kid in my class – who was the kindest and most liked – was fat. weird how there's only 1 fat kid in insatiable. weird how actually 67% of americans are overweight. ?

You can do better

Insatiable. Just. What? WHAT? come on. Do better.

a netflix original that doesn’t feature an actress wearing a fat suit? where a larger-sized girl learns to love herself? where the “evil pretty girl” turns out to be the protagonists friend rather than perpetuating a vapid stereotype? …and then they make insatiable? HOW https://t.co/utsBfhX6OW

Do you think Insatiable should be canceled? Let us know your thoughts in the comments below.

Next, Johnny Depp spells trouble in ‘Fantastic Beasts: The Crimes of Grindelwald’ trailer.

Netflix Threatens to Crack Down on Password Sharing
MoviessponsoredOctober 18, 2019