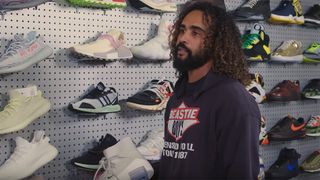 Jerry Lorenzo is scheduled to release his much-anticipated Nike collaboration later this week, the Fear of God 1. Ahead of the launch, the designer met up with Joe La Puma at Flight Club in Los Angeles for the latest episode of Sneaker Shopping.

During his visit, Lorenzo dishes on finding a particular sneaker silhouette he likes and buying multiple pairs, his appreciation for archival sneakers and the nostalgia surrounding them, peak Jordan era, and Allen Iverson’s influence on the NBA and culture in general. In addition, the Fear of God designer reveals what it’s like to work with Kanye West and of course, his impending Nike collaboration.

Press play above to hear from Jerry Lorenzo on this week’s episode of Sneaker Shopping, and don’t forget, the Fear of God 1 drops Saturday, December 15.

In other sneaker news, Travis Scott recently stepped out in another reverse-Swoosh Air Jordan 1.

Take an Official Look at the “Oatmeal” Air Fear of God 1
SneakerssponsoredOctober 28, 2019