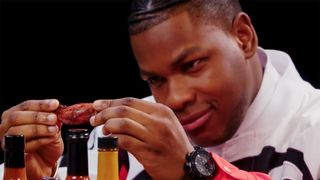 First We Feast wraps up season 10 of Hot Ones with special guest John Boyega. The episode arrives ahead of the release of Star Wars: The Rise of Skywalker, which lands in theaters December 20.

Boyega channels his Nigerian roots for the spicy wings challenge, as he seemingly breezes through the hot sauce lineup for the majority of the episode. In between chicken wings, the 27-year-old actor dishes on the importance of the theater in the UK, anime storytelling, and self-help books. He also remembers taking Harrison Ford to eat Nigerian food and recounts his lightsaber training for Star Wars.

To little surprise, Boyega discusses a number of Star Wars hot takes during the interview. Press play above to check it out, and again, you can catch him in The Rise of Skywalker later this month.

John Boyega’s ‘Star Wars: The Rise of Skywalker’ Script Was Listed on eBay for $84
MoviessponsoredNovember 28, 2019

The Jonas Brothers Say John Mayer Stole One of Their Songs on ‘Hot Ones’
MusicsponsoredMay 30, 2019