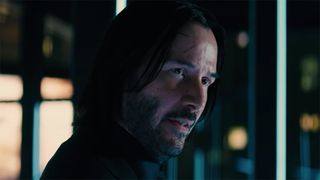 Earlier this year we received the first trailer for John Wick: Chapter 3 — Parabellum, the latest chapter in the John Wick saga. Now ahead of the May premiere, Lionsgate gives us another look at the elite assassin played by Keanu Reeves in the upcoming film.

Following the events of John Wick: Chapter 2, Reeves’ John Wick is on the run after killing a member of the underground society he was once a part of. Now excommunicated, Wick has a $14 million bounty on his head, as virtually every blood-thirsty assassin has come out of the woodwork to collect.

John Wick: Chapter 3 — Parabellum comes to theaters on May 17.

Critics Say ‘John Wick: Chapter 3 — Parabellum’ the Most Epic Film in the Saga So Far
MoviessponsoredMay 13, 2019

Fans Are Calling ‘John Wick: Chapter 3 — Parabellum’ the Best in the Series
MoviessponsoredMay 17, 2019