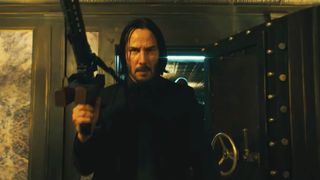 The first trailer for John Wick: Chapter 3 — Parabellum is finally here, and our favorite gun toting, dog loving assassin is taking on an entire city!

Picking up from the events in chapter 2, Wick has been ex-communicated from the secret assassin organization that he was affiliated with and now has an enormous bounty on his head. With every assassin in New York city gunning for him, John takes the fight to them creating the next level and gruesome action sequences fans grown to love from the series.

Chad Stahelski returns as director for John Wick: Chapter 3 as well as Laurence Fishburne and Ian McShane returning to reprise their respective roles as the Bowery King and Winston. Newcomers, Halle Berry and Jason Mantzoukas are set to make their franchise debut.

Jude Law Is Back With Newcomer John Malkovich in First ‘The New Pope’ Trailer
TrailerssponsoredAugust 28, 2019
What To Read Next
Load More
Search Results
Load More