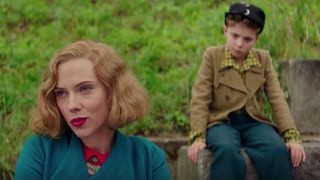 Back in July we received an early look at writer-director Taika Waititi‘s new film, Jojo Rabbit. As the movie is due out in theaters next month, Fox Searchlight now shares the first full-length trailer for the World War II satire.

Jojo Rabbit centers around a young German boy called Jojo (Roman Griffin Davis) who deeply longs to fit in. His world is turned upside down when he discovers his mother, played by Scarlett Johansson, is harboring a Jewish girl (Thomasin McKenzie) in their attic. Jojo is then forced to confront his blind nationalism aided by his imaginary friend, Adolf Hitler (Taika Waititi).

Jojo Rabbit is directed and written by Taika Waititi, based on the book Caging Skies by Christine Leunens. You’ll be able to catch the movie in theaters beginning October 18.

Look at this cool art poster thing for my movie. Keep looking at it. That’s it, keep lookiiiiing. Ok that’s enough!

Taika Waititi Might Be Developing the Next ‘Star Wars’ Movie
MoviessponsoredJanuary 17, 2020
What To Read Next
Load More
Search Results
Load More