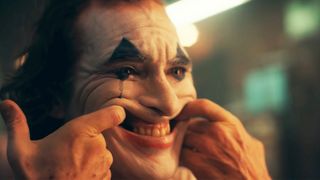 The first teaser trailer for Joker has finally arrived and it delivers a whole new perspective on DC’s green-haired supervillain. Watch above.

The movie is set to be an origin story, following Arthur Fleck (Joaquin Phoenix), a failed stand-up comedian whose life appears to be one unfortunate event after another: he’s abused on the street, hit by a car, mugged, mocked.

“I used to think that my life was a tragedy,” Arthur says in the trailer as he transforms into his alter ego, the Joker. “But now I realize it’s a comedy.”

The trailer is backed by Nat King Cole’s “Smile,” a wistful track that becomes pretty creepy when paired with Arthur’s wild laughter and a shot of fictional psychiatric hospital Arkham Asylum, giving us an indication of the direction the movie will take.

Vin Diesel Is as Sentimental As Ever in Ominous First ‘Fast 9’ Teaser Trailer
MoviessponsoredJanuary 29, 2020