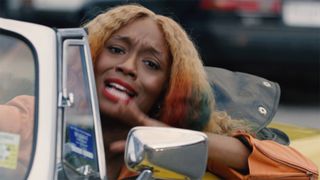 After dropping the single “They Know” last month, Junglepussy is back with a video for “State of the Union.” The David Wept-directed visual follows the New York rapper taking full charge of the beat and showing love to her family and her neighborhood respectively on the block where she grew up in East New York.

“I shot this with my family where I grew up on my grandparents’ block in East New York,” she said in a press release.” It had to be my most exciting shoot yet. I’m so grateful they’re in a Junglepussy video that will [last] forever.”

Junglepussy is currently wrapping up her North American headlining tour. The last performance will go down on October 28 in Boston. She was also recently featured on a remix of Kelela‘s 2017 single “LMK” with Princess Nokia, Cupcakke, and Ms. Boogie. For more Junglepussy, revisit our review of her JP3 album.

In other news, Empress Of shares a visual for her latest single “I Don’t Even Smoke Weed.” Peep it right here.