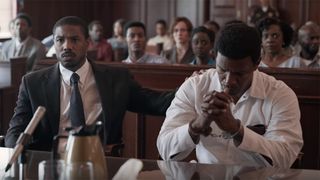 Just Mercy tells the chilling true story of a young lawyer named Bryan Stevenson (Jordan) and his fight for justice. Instead of opting for one of the many high-paying job offers he received after graduating Harvard, Stevenson decides to head to Alabama to defend those who have been wrongfully convicted or not offered proper representation. Upon partnering with local advocate Eva Ansley (Larson), the two first take on the case of Walter McMillian (Foxx), who was convicted of murdering an 18-year-old girl and sentenced to die, albeit no evidence pointed to his guilt. Stevenson and Ansley are forced to address racism at every turn during their fight to free McMillian and others like him.

The Air Jordan 11 “Bred” Retro Is Reselling at Just Above Retail
SelectssponsoredDecember 13, 2019