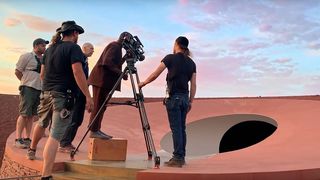 Less than a week before its release, Kanye West has offered us a glimpse behind the scenes of his Jesus Is King documentary, the the cinematic accompaniment to Ye’s as yet still postponed album.

Like the film’s official trailer, this one also opens with scripture from Mark 1:15 before showing picturesque scenery of Arizona’s Painted Desert. It follows Kanye and his team setting up the camera outside the Roden Crater, artist James Turrell’s never-before-seen installation where much of the Nick Knight-directed Jesus Is King was filmed. We see Kanye’s choir rehearse while he watches and catch Ye in the editing suite.

In an inspirational voiceover, Kanye speaks about his vision. “We’re here to spread the gospel. I’m not here for your entertainment. We’re here to save souls. Here to save people from eternal damnation. I use art to make believers.”

Press play above for an intimate look at the making of the film. Kanye West’s Jesus Is Kingmovie, which comes to IMAX theaters starting on October 24. Tickets are on sale now here.

On this week’s episode of The Dropcast, we are joined by DMV’s IDK who recently dropped his debut album Is He Real? featuring a slew of big hip-hop names.

Kanye West Will Only Make Gospel Music From Here on Out
MusicsponsoredSeptember 30, 2019

Here’s How You Can Get Tickets for Kanye West’s ‘Jesus Is King’ IMAX Film
MusicsponsoredOctober 17, 2019