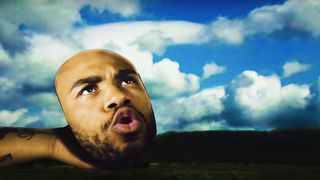 After teasing new music in recent weeks, Kevin Abstract has dropped a new video. Uploaded to the ROCKHAMPTON YouTube account, the short visual is titled “THE 1-9-9-9 IS COMING.” According to Shazam, however, the song in the video is titled “Big Wheels.”

The artist also posted another teaser visual to his Instagram, watch it below.

Abstract also uploaded a cryptic image overlaid with “11th 18th 25th ARIZONA baby.” No month was been specified for those dates, but fans are hoping that this means more new music will arrive this later this April.

Back in March, Abstract posted a clip on Twitter that seemed like a trailer for the new project. Text reading “Teach me empathy,” “Teach me how to feel,” and “ARIZONA baby” appeared among various shots of the musician and someone jumping into a pool.

He also shared an image that looked like an album cover, with a parental advisory sticker in the corner, which added additional fuel to the initial speculation that he might be releasing a new solo album.

Abstract already has two albums under his belt, MTV1987 from 2014 and 2016’s American Boyfriend: A Suburban Love Story. Check out the clip and possible new album artwork below.

Kevin Abstract Confirms Brockhampton Is “Going to Be Over in a Few Albums”
MusicsponsoredOctober 7, 2019

A Brief Guide to the Ubiquity of Rap Label Disputes & the Artists Stuck in Hell
MusicsponsoredMarch 5, 2020