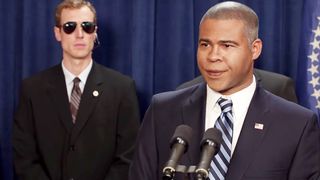 If you’ve spent any time on Twitter over the last few days, you’ll probably have noticed a clip from Comedy Central’s Key & Peele doing the rounds after becoming the latest meme to take the social media platform by storm.

Resurrected from 2014, the sketch in question shows Jordan Peele as President Barack Obama, meeting and greeting people. Not everyone in the crowd gets the President’s same warm embrace, however. Watch the original clip above.

Fans have taken the skit as a funny, relatable, and sometimes controversial way to riff on universally divisive matters, such as Marvel movies, fast food chains, and albums by the artist formerly known as Kanye West.

Here’s our roundup of some of the best “Obama Meet & Greet” memes:

best shit i ever made ??? pic.twitter.com/BurNtpRqcm

This took me far longer than it should have….

It had to be done.

Don't @' me with the "What's wrong with *insert game here*" pic.twitter.com/uVEAg6eHRI

How we really deal with depression

How I deal with my depression.. pic.twitter.com/brfNtiiX4B

Expressing the way I feel about fast food through key and peele! pic.twitter.com/qKvQeOBS0e

"What if someone did that Key and Peele thing but with wrestlers?"

Which Key & Peele ranking meme do you agree with most? Let us know in the comments.