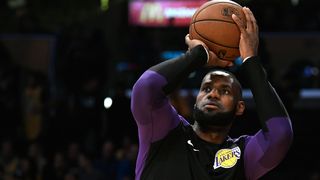 Showtime has released the first trailer for Shut Up and Dribble, the documentary examining the history of activism in the NBA. Executed produced by LeBron James and narrated by Jemele Hill, the documentary traces the history of the league to the present day, where basketball players are bonafide cultural icons, often with deep commitments to social and political issues.

The documentary’s title refers to Fox News host Laura Ingraham, who told James to “shut up and dribble” after the player told ESPN that President Trump “doesn’t understand the people.”

Shut Up and Dribble will air Saturday, November 3 at 9PM ET/6PM PT on Showtime.

Off the Court: LeBron James Brings His Story of Leadership to Berlin’s Youth
LifesponsoredJune 17, 2019

Work From Home
What Have NBA Players Been Up To Without Games to Play?
LifestylesponsoredMarch 20, 2020
What To Read Next
Load More
Search Results
Load More