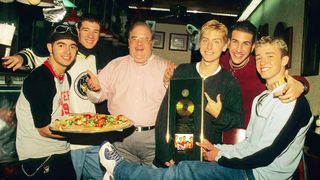 Premiering today at the SXSW film festival, the official trailer above spotlights members of boybands, *NSYNC and The Backstreet Boys, discuss just how Lou Pearlman was able to scam the singers, despite selling millions of records and selling out concerts.

N’Sync’s Lance Bass says in the trailer, “Things were going great for us, this was going to be our first check presentation. I open up the envelope, I see the check and oh my gosh, my heart sunk. I couldn’t believe the number I was looking at.”

“Something isn’t adding up. Lou’s getting paid. Promoters are getting paid,” Backstreet Boys’ A.J. McLean revealed in the trailer. “Never in a million years thought a person that I entrusted my life with could do something like this. And then to find out how many other people this thing that he did affected.”

The documentary also tracks Lou Pearlman’s early childhood in Queens, through discovering *NSYNC and The Backstreet Boys, and chronicles his later life, as the mastermind of one of the largest Ponzi schemes in American history. Interviews with Ashley Parker Angel, J.C. Chasez, and more are also featured.

The Boy Band Con: The Lou Pearlman Story will be available to YouTube Premium subscribers on April 3.

Search for ‘The Legend of Cocaine Island’ in New Netflix Documentary
MoviessponsoredMarch 15, 2019