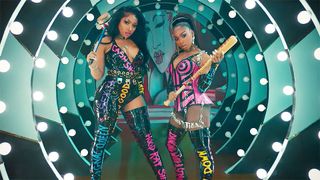 Last night, the official video for Megan Thee Stallion and Normani‘s collab “Diamonds” dropped. The track is set to appear on the soundtrack for DC’s upcoming Birds of Prey and while we’re sure that movie will be a banger, Meg and Normani are the superheroes we’re really here for. And Twitter seems to agree.

In the video above, Megan Thee Stallion and Normani deliver Harley Quinn on a baseball-bat-assisted-rampage energy, alongside a homage to Marilyn Monroe’s iconic role in “Gentleman Prefer Blondes,” mirroring Margot Robbie in the first Birds of Prey trailer. Watch the video up top.

Ever since the video dropped, social media has been exploding with enthusiasm for both artists. See what everyone is saying below.

Megan’s flow and Normani’s vocals…. I told y’all 2020 is their year pic.twitter.com/qz8JVnvomx

the way normani ate this part right here and the way she was mirroring marilyn… she ate ? #DiamondsOutNow pic.twitter.com/JrasdmaHiG

NORMANI ATE AS ALWAYS!!! MY BTCHHHH!!#DiamondsOutNow

BUT CAN WE APPRECIATE NORMANI ’S VOCALS ON DIAMONDS. LOOK HOW SHE ATE THAT #DiamondsOutNow pic.twitter.com/jUBxIDfTjZ

the song is a bop but i stayed up for the mv- #DiamondsOutNow pic.twitter.com/39JPvLWz2U

Birds of Prey is set to land in theaters on February 7 2020.