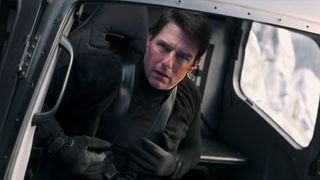 Paramount Pictures has released a new trailer for Mission: Impossible — Fallout, with leading man Tom Cruise once again putting his body on the line in a series of death-defying stunts.

In this sixth Mission: Impossible movie, Cruise returns as Ethan Hunt, who must fix a botched Impossible Missions Force job, all while proving his loyalty to the CIA, preventing a global catastrophe, and dodging several assassins who’re after his head. And to do this, Cruise has to dodge tumbling helicopters, jump out of multi-story buildings, smash through stone pillars, and engage in the odd epic car chase. All in a day’s work, then.

Fans will have to wait until July 27 to see Mission: Impossible — Fallout, but you can always hit repeat on the play button above until then.

For more movie madness, watch Rami Malek as Freddie Mercury in the teaser for ‘Bohemian Rhapsody.’

Donnie Yen Is Back in the New ‘IP Man 4’ Trailer
MoviessponsoredNovember 5, 2019
What To Read Next
Load More
Search Results
Load More