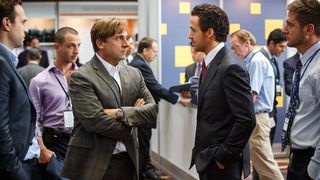 As all things do with time, our 5 Movies to Watch This Week series has run its course and is evolving into something slightly different. Instead of simply listing a selection of five movies each week, we’re going to take a look at one well-liked film and offer you a selection of similar films that are just as good or better.

To get the most out of each and every film you dedicate your time to watching, we also hope to further familiarize our audience with some of their favorite directors by highlighting said directors’ less popular films, etc.

With this week’s entry we’ve decided to highlight the Oscar-nominated drama The Big Short. Telling the story of the financial crisis of 2007–2008, which was triggered by the build-up of the housing market and the credit bubble, the film stars Christian Bale, Steve Carell, Ryan Gosling, and Brad Pitt. The film is currently nominated for Best Picture,

In the inner sanctum of a fly-by-night brokerage firm, hyper-aggressive young stock jocks peddle to unsuspecting buyers over the phone — and are rewarded with mansions, Ferraris and more luxury toys than they know what to do with.

Filmmaker Michael Moore explores corporate greed, the global economic meltdown, and their disastrous effect on American lives. As he travels from the Heartland to the financial epicenter of New York and the halls of government in Washington, Moore delves into the price the country pays for its love of capitalism.

The global financial meltdown that took place in Fall 2008 caused millions of job and home losses and plunged the United States into a deep economic recession. Matt Damon narrates a documentary that provides a detailed examination of the elements that led to the collapse and identifies keys financial and political players.

Investment-firm analyst Peter Sullivan uncovers sensitive information that could plunge the entire firm into peril, inadvertently destroying the lives and careers of his colleagues. Over the course of the next 24 hours, Sullivan realizes that the decisions he makes will not only affect the employees of the firm, but the lives of everyone in America.

Based on the bestselling book by Andrew Ross Sorkin, Too Big To Fail offers an intimate look at the epochal financial crisis of 2008 and the powerful men and women who decided the fate of the world’s economy in a matter of a few weeks. Centering on Treasury Secretary Henry Paulson, the film goes behind closed doors to examine the symbiotic relationship between Wall Street and Washington.