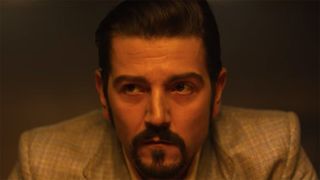 Narcos: Mexico is scheduled to hit Netflix next week, but ahead of the premiere, the streaming service shares another look at the anticipated crime-thriller. The latest look at the series finds the DEA and the Guadalajara cartel ultimately going to war with one another.

Narcos: Mexico pits Michael Peña and Diego Luna alongside each other, with Peña playing DEA agent Kiki Camarena and Luna, Miguel Ángel Félix Gallardo, the godfather of the first Mexican drug cartel in the 1980s. This particular trailer shows the two men and their respective forces engaging in battle, thus providing insight into the early days of the DEA as well as the Guadalajara cartel.

Watching Narcos won’t be necessary before diving into Narcos: Mexico, but those familiar will recognize select faces and scenarios. In addition to Peña and Luna, the series features Aaron Staton, Alejandro Edda, and Jose Maria Yazpik.

For more entertainment, watch the trailer for Netflix and Blumhouse’s new horror-thriller, ‘Cam.’

Quavo Is In ‘Narcos: Mexico’ Season 2 & Twitter Is Losing It
MoviessponsoredFebruary 13, 2020

How to Effortlessly Nail the ‘Narcos: Mexico’ Drip
SelectssponsoredJanuary 30, 2020