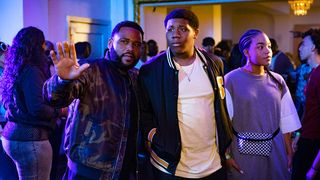 Black-ish‘s Anthony Anderson stars in Netflix‘s new coming-of-age drama about a teenage musical prodigy in Chicago, while Khalil Everage makes his feature film debut in Beats, which is due out on the streaming platform this summer. Above you can get your first look at the movie courtesy of the official trailer.

In Beats Anderson portrays a down and out high school security guard, who upon discovering the hidden talent of one of his students looks to get back into the music business. Opposite Anderson is Everage’s character who is the reclusive musical prodigy with a propensity for making fire hip-hop beats. Together, they attempt to rid themselves of past demons while trying to break into the city’s music scene.

Uzo Aduba and Emayatzy Corinealdi also feature in Beats, which Netflix says is the “ultimate ode to Chicago’s South Side and its long history of creating music that forms the city’s beating heart.” The movie releases June 19.