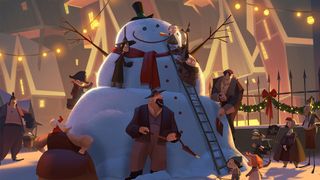 While we have yet to get to Halloween, Netflix is looking ahead by sharing its lineup of movies, TV shows, and other programs coming to the streaming platform for the holidays. You’ll soon be able to get all cozy on the couch and watch an array of fun-filled family comedies, festive romantic dramas, and much more.

Netflix has numerous original films and TV shows scheduled to release throughout November and December, ranging from Holiday in the Wild starring Rob Lowe and Kristin Davis; to Klaus with J.K. Simmons, Jason Schwartzman, and Rashida Jones; The Knight Before Christmas starring Vanessa Hudgens; original series Merry Happy Whatever and Sugar Rush Christmas; and more.

Press play on the video above for a glimpse at what to expect from Netflix’s holiday lineup, then see below for the complete list of titles.

The Knight Before Christmas

A Christmas Prince: The Royal Baby

The Movies & Shows Coming to Netflix in January 2020 We’re Most Excited About
MoviessponsoredDecember 12, 2019

Here’s Everything Coming to & Leaving Netflix This December
MoviessponsoredNovember 21, 2019

Here’s Everything Coming to & Leaving Netflix This May
MoviessponsoredApril 25, 2019
What To Read Next
Load More
Search Results
Load More