In a sea of creative minds, it’s hard to stand out. But while we’re all searching to refine our crafts and live our passions, for a select few, perfecting those pursuits has established them as international icons—both in their respective fields, and the global creative scene.

That respect doesn’t demand the limelight. Rather, this shade of success stands quietly and confidently—in other words, letting hard work speak for itself. A combination of decades-long research and design, the New Balance 990’s unassuming nature has cemented it as a sneaker for those with the assuredness to stand on their own. Honoring individuals who share these qualities of understated excellence, we’re uncovering the unique attributes behind what makes a creative a critic’s choice. If you have the vision, you don’t need to shout it from the rooftops; it’s always more impactful when creative work can get its message across with a collected statement rather than a scream.

This is especially true when discussing Maxime Büchi and the creative universe that is Sang Bleu. For a man like Büchi, his ceaseless vision has allowed him to pursue his passions within the fields of tattoos, design, publishing and fashion. More importantly however, he’s been able to retain the simplicity of his unique vision—covering multiple fields of creativity without overwhelming or alienating the many facets of his equally vast and varied audience(s).

“Even while we’re talking he’s probably started three Instagram accounts, and two magazines, and planned a tour, and done another watch collab,” sighs writer, Gwarizm founder and human sneaker and streetwear encyclopedia, Gary Warnett. “He just never stops.” Sure, Büchi may have Sang Bleu tattooed across various realms of art and design—including an arts and culture magazine, a streetwear line, a creative agency, a type-design studio and a partnership with a famous Swiss watchmaker—but those who know and work with him never feel as if his work is overwrought, overexposed, or overdone. 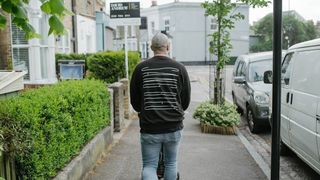 As in-demand as Büchi’s perspective may be across Sang Bleu’s many platforms, he’s still someone that stays grounded in reality—even as he’s tattooing some of the world’s biggest celebrities. “What I love about him is that, whoever he’s around, he’s himself,” remarks designer, stylist and creative director Carri “Cassette Playa” Munden. “Whether it’s someone in the corner shop, or Kanye West, he’s himself; he knows himself.”

Whatever draws someone into the world of Sang Bleu, once you’ve worked with Büchi (or, better yet, sat in the chair at one of his two tattoo studios), you’re welcomed into a tight-knit group of “in-the-know” insiders. As photographer Maxime Ballesteros puts it simply: “You can recognize his tattoo on somebody and be like, ‘Oh, you went to see Max.’”

While not the sole reason for his success, as someone that’s prospered in so many creative avenues, it’s clear that being able to optimize his time and taste is something Büchi has in spades. By staying true to the core aesthetic values of “Sang Bleu” regardless of pursuit, Büchi has found crossover appeal without having to demand attention or beg for recognition. To score a multitude of successes, sometimes you simply need a strong singular vision.

Celebrating 35 years of innovation and a favorite of those on the frontline of the creative process, the New Balance 990 is the sneaker of choice for those at the forefront of culture. To honor that history, we’re teaming with New Balance to highlight three people who embody the best of their craft, while exemplifying the unique traits that have lead them to both local and global success. We’ll be telling the story of more innovative individuals in the coming days. For now, read everything you wanted to know about the New Balance 990’s history.

3 Classic New Balance Sneakers & How Instagram Is Styling Them
SelectssponsoredOctober 28, 2019

This Upcoming New Balance 992 Blends a Subtle Upper With a Wild Sole
SneakerssponsoredMay 28, 2020