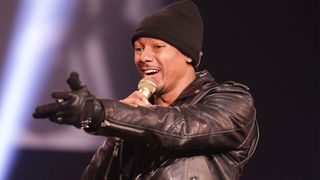 Despite getting absolutely roasted by Twitter yesterday, Nick Cannon has just dropped another Eminem diss track titled “Pray for Him.” On the song, The Black Squad and Nick Cannon can be heard going on Eminem mercilessly over an instrumental of JAY-Z‘s “Renegade.” Listen to the new diss track above.

Following the latest diss, former Shady Records signee Obie Trice quickly rushed to Eminem’s defense with a track of his own. Titled “Spanky Hayes,” Trice’s one-minute blast features jabs against Cannon over another JAY-Z instrumental, this time “30 Something.” Listen below.

Cannon’s previous diss track, “The Invitation,” dropped on December 9, in retaliation to Eminem’s verse on Fat Joe’s new album track, “Lord Above.” Twitter wasn’t too impressed with Cannon’s retaliation, and neither was Eminem, who demanded an apology and asked, “U mad bro? Stop lying on my dick. I never even had a chauffeur, you bougie f*ck.”

U mad bro? Stop lying on my dick. I never even had a chauffeur, you bougie f*ck.🤡

I demand an apology Nicholas, you've made my gardener so jealous!

The feud between Nick Cannon and Eminem reignited following Em’s appearance on Fat Joe’s recent album, Family Ties, where he once again touched on his issues with Cannon and his ex-wife, Mariah Carey. As a response to Eminem’s feature on “Lord Above,” the actor/TV host/musician unleashed “The Invitation,” taking aim at Em’s history of drug addiction, as well as his family.

“I fuck with Crack, but the white boy he fuck with crack / Pills and smack, shit, and he ‘bout to relapse,” Cannon raps. “Call Kim, somebody get Hailie / And that other kid you raisin’, that ain’t even your baby.”

In addition to spotlighting Eminem’s drug-related past — the Detroit rapper battled drug addiction before getting clean ahead of his 2009 album, Relapse — Cannon targeted Em’s ex-wife, Kim Scott; his daughter, Hailie; and two other girls he raised.

Nick also took a few bars to address Eminem’s alleged relationship with Mariah Carey, of which she has rebuffed on multiple occasions — rapping “My baby mama killed you off a decade ago / You’re still cryin’ about it, bitch, now who really the ho?” — as well as a supposed sex tape of Eminem, “I heard your chauffeur got a video of you suckin’ a cock / You paid him off, then laid him off, now who really the opp?”

The beef between Em and Mariah dates back years, with the Detroit rapper insisting they dated when she continues to deny a relationship ever existed. Eminem has dissed Mariah on multiple tracks, leading Cannon to get involved shortly thereafter.

Nick Cannon’s Eminem Attack Is a Masterclass on How Not to Beef in the Twitter Age
MusicsponsoredJanuary 17, 2020
Follow
Highsnobiety Music
What To Read Next
Load More
Search Results
Load More