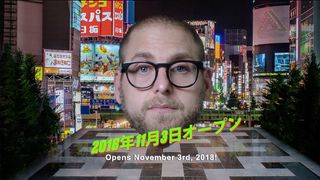 Shortly after teasing its upcoming collaboration with Polo Ralph Lauren via three mysterious billboards in Tokyo, Palace has officially revealed it will be opening a store in the Japanese capital.

The announcement was made through a short teaser video featuring the one and only Jonah Hill. Watch the video above.

Jonah Hill has worked with Palace in the past, previously appearing in the brand’s Reebok collaboration lookbook and teaser video, and in the brand’s New York store announcement. The actor is also a well known streetwear ’fit god and has rocked Palace on several occasions.

The teaser video also reveals a Palace triferg T-shirt, which will presumably be available at the Tokyo store when it opens on November 3.

What do you think of Palace’s expansion into Japan? Let us know in the comments.

Sneakersnstuff Announces Tokyo Store to Open by End of 2019
SneakerssponsoredOctober 28, 2019