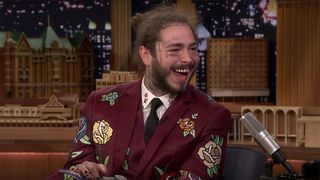 Post Malone stopped by The Tonight Show Starring Jimmy Fallon last night to discuss his come-up and also preview new material. After detailing how he learned to play the guitar, as well as his rise to prominence, Post allowed Jimmy to debut his unreleased song, “Sunflower,” from the new Spider-Man: Into the Spider-Verse soundtrack.

In addition, the budding musician revealed how Justin Bieber ruined his first tattoo and also spoke about his debut album, Stoney, and the inaugural Posty Fest.

Marvel’s Spider-Man: Into the Spider-Verse arrives in theaters December 14. You can watch the latest trailer below.

In other music news, BROCKHAMPTON have teased their new song with A$AP Rocky.