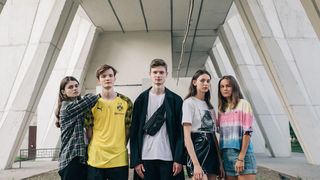 When the idea of “post-soviet” style fully hit internet feeds in 2016, it was like the world had never seen Russia or Eastern Europe before. The aesthetics of the period that saw the country and territories transform from the Soviet Union in 1990 into the countries we see today captivated the fashion industry of the western world.

Rightly, debate ensued around what this could mean, as fashion—an industry often labeled by detractors as fickle and superficial—became infatuated with the collective history of Russian and Eastern European societies and the way they dressed. Cyrillic lettering, tracksuits, and the aesthetics of brutalist concrete housing projects made their way into the show notes of designers and brands, whether they originated from a former Warsaw Pact country or their former adversary, the United States. On the negative side, these elements became tropes and cemented an idea of the east that hadn’t really moved on from the imagery of cold war spy movies.

However, on the positive side, the latent creative industry and community in Russia (and across eastern Europe) suddenly had a new attentive audience. The world was hungry for what they had to say, from the everyday lived experience, to their history, and, of course, any and all ideas conveyed through what they wear.

“Russian streetwear is a subculture with its own traditions and its own values and with different roots if we are comparing to the western world,” explains Dimitry Oskes, founder of streetwear agency & exhibit, “Faces & Laces”, in our new film with PUMA Football, above. “It’s totally different.”

Oskes joins a number of people we spoke with to get to the heart of Russian streetwear today, including Maksim Bashkaev, Co-Founder of Outlaw Moscow, KM20’s Ivan Fadeev, theblueprint.ru’s editor-in-chief Julia Vydolob, as well as the independent artist and creative director, Abu Blunt, who specializes in making 1-of-1 clothing pieces to be sold exclusively via their Instagram.

“For me it can just be a random guy who lives at the house across from me […] He can create cool clothes and probably only five people in Moscow are wearing it,” explains Blunt. “This is Russian streetwear for me.”

For more from Moscow, check our latest street style round-ups from the Russian capital here: part one and part two.

The Best, Worst & Most WTF Football Jerseys of the Upcoming Season
StylesponsoredAugust 9, 2019