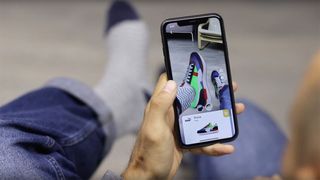 PUMA has partnered with augmented reality app Wanna Kicks to let fans try on new colorways of the Future Rider before they drop.

The innovative AR app launched in January by Belarus-based startup WANNABY and has been somewhat of a hit with sneakerheads looking to match their fits with the hottest new releases. The partnership continues PUMA’s FUTRO philosophy that merges contemporary and retro elements together to create new icons of the future. It’s not PUMA’s first time dabbling in augmented reality; the brand recently challenged the public to reimagine this very sneaker in AR as if it were a shoe from the distant future.

The fledgling app works by using advanced “3D geometry algorithms” in conjunction with neural networks to determine a shoe’s position in space. According to WANNABY, it’s these algorithms that are the secret sauce to the app’s success and their main innovation. You can still shop other styles in the Rider family to scratch your PUMA itch while you wait for these colorways to drop, like the Style and Fast Rider.

Check out the PUMA Future Rider using the Wanna Kicks AR filter available now on iOS, and be sure to keep the app updated to stay in the know about upcoming silhouettes as they release.