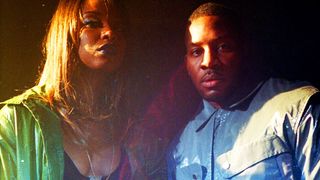 It’s Wednesday my dudes. We don’t know about you, but we could use some neon-lit, Blade Runner-inspired visuals to shake things up. Luckily, one of our new favorite MCs Ragz Originale is here to help. Back in August, he popped up on our radar with his collaborative track “Send” with Oscar #Worldpeace. Now, he’s dropping the official music video for “She Said Run” featuring Cartae from his upcoming album Nature, set to drop this Friday, October 12.

As Ragz himself tells us over email, he co-produced the track with his younger brother E-Whizz. As he explains in his own words, “I came back late from studio one night, went into my brother’s room to show him some new records. He played me the demo beat for “She Said Run” and I went bonkers, I started making melodies on sight. I knew I was gonna need Cartae to take it to the final level melodically… With this track I wanted to make people really, really dance again. No 2 steps allowed on this one. “She Said Run” is how Tokyo sounds at night time, in my head.”

As for the visuals, a stunning Blade Runner-type trip through an unknown city that could very well be Tokyo, director Jay Green had this to say:

“While the video is a continuation of the “Dissorano Straight” story – Ragz and myself wanted to change the mood from the dramatic feel of the previous video to a more bouncy and energetic vibe. This not only matched the track better but also helped convey the couple’s escape from their crimes and demons.”

So what are you waiting for? Check out the video for “She Said Run” above and propel yourself into the future.

If you happen to find yourself in London tonight, be sure to check out Ragz’ party at Giant Steps, where you can listen to Nature before it drops on Friday. You can RSVP for the event here.

For more of our premieres, lighten the mood with Magic Potion’s serene “Foamy Lace.”

Work From Home
Here’s What to Wear While You’re Working From Home
SelectssponsoredMarch 12, 2020
Follow
Highsnobiety Music
What To Read Next
Load More
Search Results
Load More