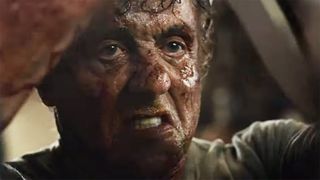 Following a teaser trailer from earlier in the year, Lionsgate gives us another look at Rambo: Last Blood. Sylvester Stallone reprises his role as action hero John Rambo in Last Blood, as the film is the final installment in the Rambo franchise.

Last Blood picks up nearly four decades after First Blood. In the movie John Rambo goes up against a Mexican cartel to save his friend’s kidnapped daughter. Rambo must confront his path while dusting off his combat skills to ultimately bring forth revenge.

Starring alongside Stallone in Last Blood are Paz Vega, Sergio Peris-Mencheta, Adrianna Barraza, Yvette Monreal, Genie Kim aka Yenah Han, Joaquin Cosio, and Oscar Jaenada. The action movie, which is the fifth installment in the Rambo franchise, is directed by Adrian Grunberg and co-written by Stallone.