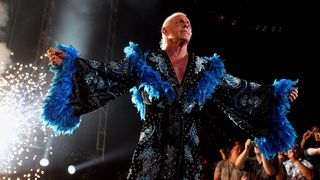 Ric Flair yesterday told TMZ that he has signed a deal with adidas. The former WWE star couldn’t give away too much information, so it remains unclear exactly what kind of partnership Ric Flair and adidas will have going forward.

Whether he will be a brand ambassador in the mold of Kendall Jenner and promote certain releases or work more in the same vein as Pharrell Williams and Kanye West in designing signature sneakers, Ric Flair made some big promises in the video above. He said “we’re fixing to make Nike the second brand” and “it’s not going to be Air Jordan anymore, it’s going to be Air Flair!”

It’s unlikely that Ric Flair will immediately get his own sneaker, instead he’ll probably get exclusive colorways of existing sneakers, similar to Pusha-T’s deal with The Three Stripes. Additionally, it would make sense for Ric Flair to have some sort of apparel line, due to his penchant for wearing wild and eye-catching outfits, both in and out of the wrestling ring.

This news follows the official announcement of Ninja becoming the first pro-gamer signed to adidas, with the German sportswear giant looking to diversify beyond the traditional athlete.

Watch the video above for more information. Needless to say, The Nature Boy Rick Flair is excited for what’s to come, and so are we.

To stay on the topic of wrestling, watch our documentary below.

What We’re Copping on Cyber Monday, All in One Place
SelectssponsoredDecember 2, 2019

15 Drops
The 15 Best Products to Drop This Week & Where to Buy Them
SelectssponsoredJune 23, 2019

15 Drops
The 15 Best Products to Drop This Week & Where to Buy Them
SelectssponsoredApril 28, 2019
Follow
Highsnobiety Sneakers
What To Read Next
Load More
Search Results
Load More