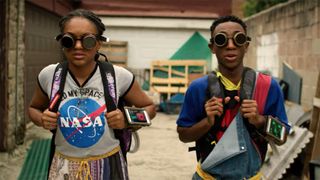 I am EXTREMELY honored that people are digging this so far. I can't wait for the world to see the movie. Bless up! https://t.co/eXENlbhwMf

See You Yesterday tells the story of high school best friends and science whiz kids C.J. and Sebastian as they travel back in time in hopes of saving C.J.’s older brother Calvin. Calvin was wrongfully shot and killed by the police while simply holding a phone in his hand.

Eden Duncan-Smith and Danté Crichlow star as C.J. and Sebastian, while Marsha Stephanie Blake, Brian “Stro” Bradley, Johnathan Nieves, Wavyy Jonez, Myra Lucretia Taylor, and Ron Bobb Semple also feature in See You Yesterday. The sci-fi picture is due out on Netflix on May 17, following a premiere at the Tribeca Film Festival on May 3.

The 13 Best & Most Influential Nike Ads of All Time
SneakerssponsoredJune 18, 2019

10 Movies Quentin Tarantino Wants You to See Before ‘Once Upon a Time in Hollywood’
MoviessponsoredJuly 18, 2019