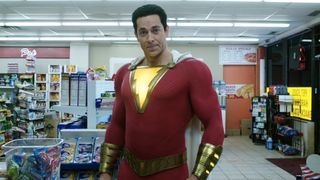 After dropping a teaser back in January, the latest trailer for DC comic movie SHAZAM! has arrived.

The new trailer shows how the teenage Billy Batson gets his superpowers – by saying the word “Shazam” – and showcases how he uses his superstrength, electricity manipulation, and hyperspeed. The hilarious clip also shows the superhero attempting to buy beer, getting his ass kicked by Dr. Sivana, and then fighting back with some help from a Batman toy. Watch the clip above.

Reaction to the trailer so far has been positive, with Eminem even co-signing it on Twitter.

My name is, who???? #Shazam @ShazamMovie pic.twitter.com/BwBpOqMKwT

Now, in case you missed it, watch the previous trailers for the movie below. SHAZAM! hits theaters April 5.