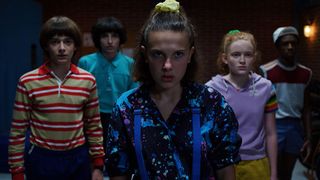 “You let us in and now you are going to have to let us stay.”

So kicks off the latest and final trailer for Netflix’s Stranger Things 3, delivering our closest look yet at the horrors Eleven, Mike, and the gang will be facing in season three. Watch above.

With El having closed the gateway to the Upside Down at the end of the second season, it now looks like she accidentally locked evil into Hawkins, Indiana rather than shutting it out. A monster is hellbent on bringing the town and everyone in it to their end, and it’s using a host body to do so.

The trailer essentially confirms that this host will be Billy, as passed along by rats, backing up a couple of fan theories that were circulating on Reddit when the last trailer dropped.

Netflix’s ‘Stranger Things 3: The Game’ Will Be Like ‘Pokémon GO’ in the Upside Down
LifestylesponsoredJune 13, 2019

Here Are All the Major Products Featured in ‘Stranger Things 3’
MoviessponsoredJuly 11, 2019
What To Read Next
Load More
Search Results
Load More