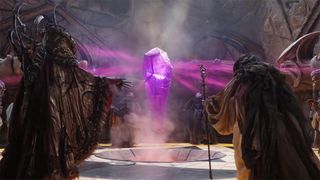 Today Netflix shares the teaser trailer for The Dark Crystal: Age of Resistance, the prequel to Jim Henson and Frank Oz’s 1982 fantasy, The Dark Crystal. The upcoming series centers around three Gelfling heroes as they lead a rebellion against the cruel emperor in an attempt to save their world.

The journey begins as dͪͦͨͣaͩͯͩͮrͦͭͭͫkͦͮͨͩnͯͮͥͨeͧͨͬͨsͯͫͣͧsͣͮͭͤ rises. The #DarkCrystal: Age of Resistance premieres August 30 on @netflix. pic.twitter.com/yzNJvrs1dD

You can look forward to the series coming to Netflix on August 30.

HBO Shares First Trailer for Its Next Fantasy Series ‘His Dark Materials’
MoviessponsoredMay 17, 2019

German Sci-Fi Series ‘Dark’ Is By Far the Most Insane & Twisted Show on Netflix
MoviessponsoredJune 25, 2019
What To Read Next
Load More
Search Results
Load More