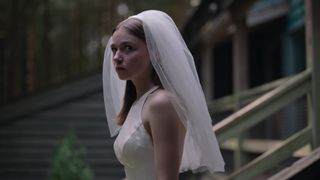 The highly anticipated season two of The End of the F***ing World is coming quick. Due out next month, Netflix drops a new trailer for the viral show hinting at new characters and teasing the fate of season one’s protagonist, James.

Season one ends on a major cliffhanger with James trying to escape gun-toting police. The screen goes black and a gun shot is heard. Since, fans have been speculating if James actually gets shot or is somehow able to survive the shocking ordeal. In the latest trailer, it seems like the former, unfortunately.

we'll be f***ing back. pic.twitter.com/K1Ai7iVeZD

In a quick glance in the video, we see Alyssa sitting over James who’s suffering from a very serious bullet wound to the stomach. This doesn’t mean that this is the end for everyone’s favorite character, but it doesn’t mean he survives either. Throughout the rest of the trailer, James makes zero appearances and it appears Alyssa has moved on.

This is all speculation for now. We’ll all have to wait until season two of The End of the F***cking World hits Netflix on November 5. Watch the trailer above.