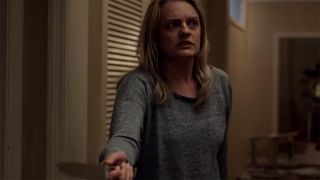 Emmy winner Elisabeth Moss (Us, The Handmaid’s Tale) stars in Jason Blum’s new horror movie, The Invisible Man, which is due in theaters in February of next year. Today we get our first look at the anticipated picture courtesy of a full-length trailer from Universal.

Moss plays Cecilia Kass in The Invisible Man, a woman caught in a violent, controlling relationship with a wealthy and brilliant scientist. Deciding the abuse has gone on long enough, Kass escapes in the middle of the night with the help of her sister (played by Harriet Dyer), their childhood friend (played by Aldis Hodge), and his teenage daughter (played by Storm Reid). Shortly thereafter, Cecilia learns that her ex has committed suicide and left her a large portion of his fortune. She soon insists that his death is a hoax and that he is merely tormenting her like never before.

Jason Blum produces The Invisible Man for his Blumhouse Productions, as Leigh Whannell of the Saw franchise writes, directs, and executive produces. The horror film comes to theaters February 28, 2020.

Humans Are Hunted for Sport in New Blumhouse Thriller ‘The Hunt’
MoviessponsoredJuly 30, 2019

Highsnobiety Premiere
MIKEY. Is a Pop Powerhouse on “Invincible”
MusicsponsoredDecember 18, 2019

INVINCIBLE’s New adidas Yung-1 Collab Is a Nod to the ’90s
SneakerssponsoredApril 29, 2019
What To Read Next
Load More
Search Results
Load More