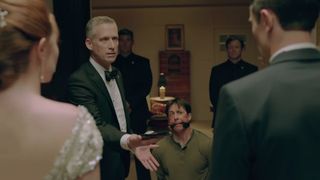 Following the theatrical release of The First Purge on July 4, USA Network is scheduled to premiere its TV adaptation of the famed franchise. Today, we get our first look at what to expect from the upcoming show.

The Purge is set in an altered America where a totalitarian political party rules. Each year, there is one 12-hour time period when all crime, including murder, is legal.

The series will follow a number of seemingly unrelated small town characters as they try to maneuver during The Purge. Along the way, they will find out more about themselves than they could have ever imagined, ultimately learning how far they will go to survive.

Written and executive produced by film franchise creator James DeMonaco, and led by Jason Blum, The Purge‘s first of 10 episodes premieres on USA September 4. Let us know if you’re looking forward to the TV series.

In other television news, ‘BoJack Horseman’ season five is arriving in September.