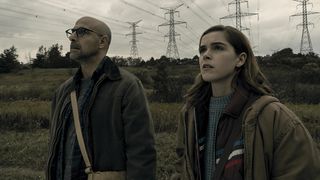 It may not feature John Krasinski or Emily Blunt, but Netflix is releasing a new movie that seems noticeably similar to 2018’s A Quiet Place. The Silence, however, is based on Tim Lebbon’s novel of the same name, which was originally published in 2015.

Starring Stanley Tucci and Kiernan Shipka, The Silence pits a family in the middle of an inescapable attack from creatures who hunt their prey by sound. Ally Andrews (played by Shipka) possesses a slight advantage over most humans, as the 16-year-old lost her hearing just three years prior, leaving her with heightened senses. When Ally and her family seek shelter at a remote location, they encounter a sinister cult looking to take advantage of Ally’s abilities.

In addition to Tucci and Shipka, The Silence features Miranda Otto, John Corbett, Kate Trotter and Kyle Breitkopf, and is directed by John R. Leonetti (Annabelle). The thriller is due out on Netflix April 10.