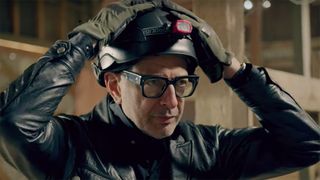 This week Disney gives us our second look at Jeff Goldblum‘s new National Geographic series, The World According to Jeff Goldblum, which is coming to Disney+. The trailer merely touches on Goldblum’s childlike curiosity, as he is admittedly “fascinated by everything.”

The World According to Jeff Goldblum finds the famed actor delving into various mediums, from coffee and ice cream, to sneakers, cosmetics, and everything in between. Each episode he will uncover the backstories to some of the simplest, and conversely most complex, things.

“Through the prism of Jeff’s always inquisitive and highly entertaining mind, nothing is as it seems in this new series,” the synopsis concludes.

The World According to Jeff Goldblum is due out on Disney’s new streaming service, Disney+, November 12.

Jeff Goldblum Is a Kooky Lobotomist in New Drama ‘The Mountain’
MoviessponsoredMay 13, 2019

‘I Shouldn’t Be Telling You This,’ But Jeff Goldblum Just Announced a New Album
MusicsponsoredSeptember 14, 2019

Watch Jeff Goldblum React to His Many Name-Drops in Hip-Hop Lyrics
MusicsponsoredDecember 12, 2019
What To Read Next
Load More
Search Results
Load More