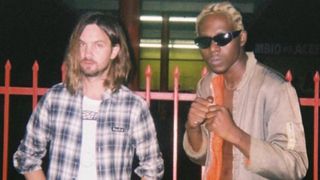 After sharing a retro-flavored video for “Only You” last fall, Theophilus London and Tame Impala‘s Kevin Parker are back with a new hit single, “Whiplash.”

“Whiplash” originally made its debut in October, along with “Only You” on Virgil Abloh’s Beats 1 Radio show The FADER points out, and this latest track further displays the enduring love affair between Tame Impala and hip-hop.

The single also marks as Theophilus London’s newest work following his 2018 mixtape, Nights B4 BeyBey. As for Tale Impala, they recently announced a fresh batch of tour dates in anticipation of a new album.

Enjoy the groovy and solid track above, and in other new music, Billie Eilish announces his debut album with “bury a friend.”