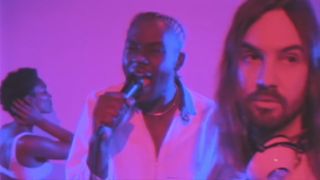 A followup to his recent Giggs collaboration, “Bebey,” Theophilus London is back with a new release ahead of his upcoming album. “Only You” was previously premiered by Virgil Abloh on his Beats 1 radio show, as today we receive the official music video for the tune.

The track finds London linking with Tame Impala‘s Kevin Parker, accounting for a reimagining of Steve Monite’s iconic 1984 song of the same name. The retro-style video then welcomes direction by Frankie Latina.

Press play above to watch Theophilus London and Kevin Parker’s “Only You” aesthetic, and be on the lookout for new material from London’s forthcoming album, due out early next year.

For more music, check out Poppy’s new collaboration with Grimes, “Play Destroy,” from her just-released ‘Am I a Girl?’ album.