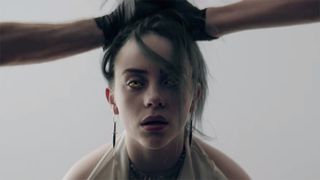 At just 17 years of age, Billie Eilish has already established a loyal fanbase, which is evident in her streaming numbers, having surpassed five billion combined streams globally. Furthermore, her debut EP, Don’t Smile at Me, has remained on the Billboard Top 200 for more than 18 months now.

Eilish will soon be giving her fans the new material they desire, as she announces the release of her much-anticipated debut album, WHEN WE ALL FALL ASLEEP, WHERE DO WE GO?, due out March 29 via Darkroom/Interscope Records. Coinciding with the news of the project, the buzzing singer-songwriter shares a new music video and single, “bury a friend.” The song was written and produced by Billie and her go-to collaborator and older brother Finneas O’Connell, while the video was directed by Michael Chaves.

“When we made ‘bury a friend,’ the whole album clicked in my head,” Billie says. “I immediately knew what it was going to be about, what the visuals were going to be, and everything in terms of how I wanted it to be perceived. It inspired what the album is about. ‘bury a friend’ is literally from the perspective of the monster under my bed. If you put yourself in that mindset, what is this creature doing or feeling?” She continues. “I also confess that I’m this monster, because I’m my own worst enemy. I might be the monster under your bed too.”

WHEN WE ALL FALL ASLEEP, WHERE DO WE GO? was written, produced and recorded entirely by Billie and her brother Finneas in their childhood LA home. Ahead of the March 29 release, you can pre-order a copy of the album here.

WHEN WE ALL FALL ASLEEP, WHERE DO WE GO? Tracklist:

Billie Eilish Breaks Down How She Made “bury a friend”
MusicsponsoredApril 18, 2019

Stream Billie Eilish’s Debut Album ‘WHEN WE ALL FALL ASLEEP, WHERE DO WE GO?’
MusicsponsoredMarch 29, 2019

Highsnobiety Review
Billie Eilish Takes the Crown on Her Debut ‘WHEN WE ALL FALL ASLEEP, WHERE DO WE GO?’
MusicsponsoredApril 2, 2019
Follow
Highsnobiety Music
What To Read Next
Load More
Search Results
Load More